We started, but this page is not yet finished. Add what you think is missing!
Research
Prototype
Testing
Optimizing
Live 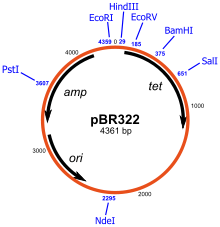 Plasmid Vector Example © 2015 Wikipedia
A vector is a DNA molecule used as a vehicle to artificially carry foreign genetic material into another cell. A vector containing foreign DNA is called recombinant DNA. Common to all engineered vectors are an origin of replication, a multicloning site, and a selectable marker. The four major types of vectors are:

The vector itself is generally a DNA sequence that consists of an insert (transgene) and a larger sequence that serves as the "backbone" of the vector. The purpose of a vector which transfers genetic information to another cell is typically to isolate, multiply, or express the insert in the target cell. Vectors called expression vectors (expression constructs) specifically are for the expression of the transgene in the target cell, and generally have a promoter sequence that drives expression of the transgene. Simpler vectors called transcription vectors are only capable of being transcribed but not translated: they can be replicated in a target cell but not expressed, unlike expression vectors. Transcription vectors are used to amplify their insert, e.g. tell the cell to produce more of a particular substance when it is already about to produce it

Here we should add even more...

Recombinant DNA was pretty much the first method to artificially design DNA. We should write a bit about the technology's significance.